Here are the top political donors from Amazon, Apple, Facebook, Google and Microsoft. Only one is backing Trump.

They’ve given $16 million this cycle. They’re mainly white men. And none is the CEO of any of the companies. 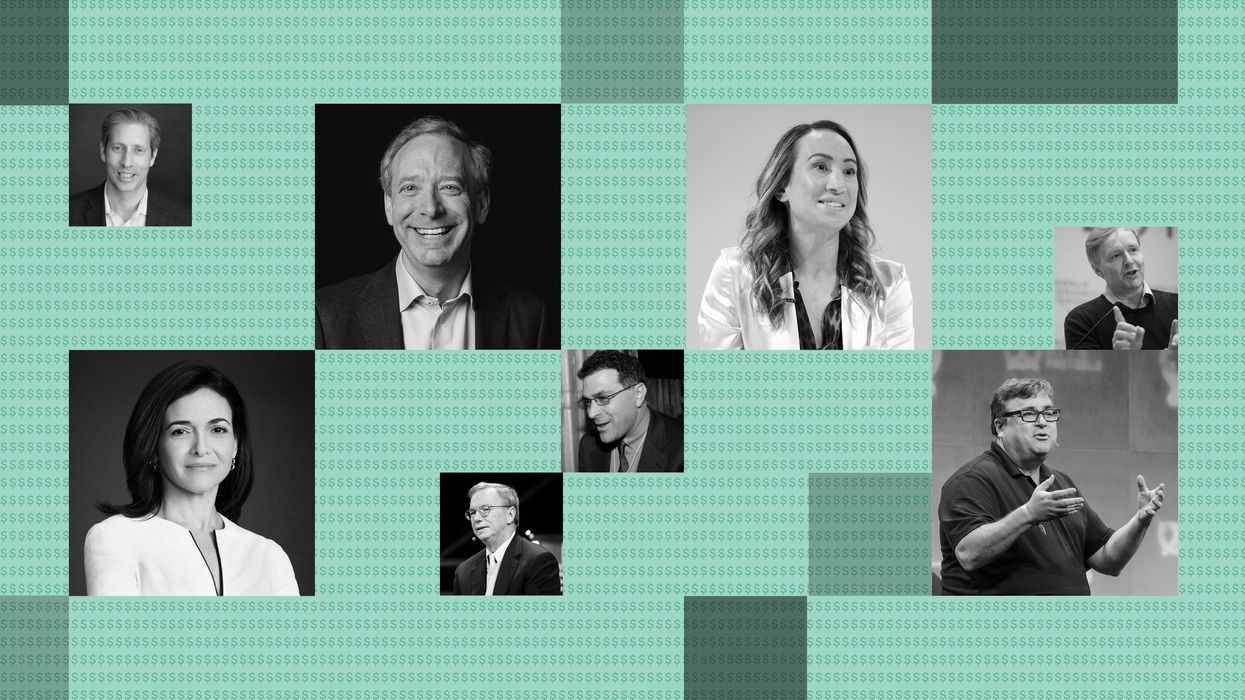 Top executives at Amazon, Apple, Facebook, Google and Microsoft have written more than 1,000 checks to political groups totaling more than $16 million this election cycle, with almost all of that money going to Democrats.

Protocol partnered with the Center for Responsive Politics to study the top donors at all five companies to find out how much they’re giving and who they’re giving it to.

Sifting through the data, some main trends emerge. Like the tech industry itself, the 20 people on this list are almost all white men. None is the CEO of any of the companies. Only one is a committed Republican donor. And compared to megadonors, who give uncapped amounts to super PACs and outside groups, these executives are actually writing relatively small checks: The average size of their largest donations was just over $183,000.

Nevertheless, their giving stands in stark contrast to that of the leaders and founders of Amazon, Apple, Facebook, Google and Microsoft, who are notoriously stingy about donating to politics and rarely, if ever, pick a horse in any race. This election cycle, they have mostly contributed sparingly, if at all, to their own corporate PACs, which carefully distribute dollars evenly across party lines.

Read on to see the top donors at Amazon, Apple, Facebook, Google and Microsoft.

Methodology: The list contains the top four donors from the top five tech companies: Amazon, Apple, Facebook, Google and Microsoft. The data reflects Federal Election Commission records as of Oct. 12, 2020, and does not include donations filed to the FEC Oct. 15. It includes anyone who’s worked at these companies since 2019 and has donated to any federal candidates, as well as the PACs and outside groups supporting them. It also includes contributions made by their spouses and dependent children, identified by the Center for Responsive Politics. It doesn’t include contributions to dark money groups that aren’t required to disclose their donors. Nor does it include prominent donors like Facebook co-founder Dustin Moskovitz or Oculus co-founder Palmer Luckey, who made their money from those companies but left prior to 2019.

Reid Hoffman, Microsoft board member and co-founder of LinkedIn

Hoffman is an outlier among his billionaire founder brethren, in that he’s both a prolific Democratic donor and still somewhat involved with the company he co-founded. He wrote his first big check — $10,000 — to the Obama Victory Fund in 2008, and since then, he’s emerged as one of the party’s biggest — and most controversial — backers. In addition to funneling money to candidates, Hoffman has invested in reinventing Democratic technology, much to the chagrin of some in the Democratic establishment. His wife, Michelle Yee, is also a major Democratic donor; she has contributed nearly half a million dollars to the Biden Victory Fund alone this cycle.

Blue is another LinkedIn co-founder who still remains at the company. He’s made no secret of his support for Democrats, tweeting regularly about Democratic causes and sharing messages from Joe Biden himself. In addition to his donation to the Biden Victory Fund, Blue has also thrown more than $160,000 into DigiDems, an organization that embeds tech, digital and data experts in campaigns.

Scott became Microsoft’s CTO in 2017, after rising up the ranks at LinkedIn. He was also one of Google’s early employees, joining that company in 2003. He and his wife, Shannon Hunt-Scott, are philanthropists, who, through their foundation, back causes related to education, women in STEM, and hunger, among other things. Both Kevin and Shannon have donated to Democratic causes this cycle, including DigiDems, and have spent more than $50,000 supporting Biden and his associated committees. Their biggest check, a more than $100,000 donation to the DNC, was made under Shannon’s name on behalf of the foundation.

As president of Microsoft, Smith is arguably the company’s most visible executive other than CEO Satya Nadella. But he’s been more willing to put his cash behind a candidate this election cycle than either Nadella or Microsoft founder Bill Gates have been. Last summer, Smith and his wife, Kathy Surace-Smith, co-hosted a fundraiser for Biden in Medina, Washington. But he is also one of the only tech executives on our list who donates in a bipartisan way. While the majority of Smith’s donations have benefited Democrats, he’s made several contributions to Republicans this cycle, including a $15,000 donation to the National Republican Congressional Committee.

Sandberg, who worked for the Department of Treasury under President Clinton, has been a reliable Democratic donor for years. In 2016, she put more than $416,000 into the Hillary Victory Fund. But that was before Facebook found itself under constant attack by the sitting Republican president. Now, Sandberg’s approach is decidedly more cautious. This cycle, Sandberg hasn’t made any contributions directly to Biden’s campaign or the Biden Victory Fund. Instead, the “Lean In” author has pumped the bulk of her donations into Women Vote!, a super PAC focused on women voters that’s affiliated with the progressive organization Emily’s List.

A 10-year veteran of Facebook, Fischer came up through Treasury with Sandberg, later worked with her at Google, and now heads up Facebook’s advertising and marketing work. This cycle, he’s backed Democrats up and down the ballot, but his biggest contribution has been to Tech for Campaigns, an organization that recruits tech volunteers to build digital tools for campaigns. Fischer has also donated to Mind the Gap, a PAC backed by other marquee names in tech, including investor Ron Conway and Google’s chief legal officer, Kent Walker. The stealthy group has reportedly worked hard to keep the recipients of its donations secret.

Gleit has worked at Facebook since 2005, making her one of the company’s longest-serving employees. In past elections, Gleit has predominantly contributed to Facebook’s PAC, but since 2019, she’s been throwing more money behind Democrats, including House Speaker Nancy Pelosi and Sen. Kamala Harris’ presidential campaign.

Schrage served as Facebook’s top public policy and communications executive through some of the company’s most challenging years. He was the one who took the fall when Facebook hired an outside PR firm that was later accused of running a smear campaign against Facebook’s critics, and he’s been a frequent fixture sitting behind Facebook executives as they testify before Congress. As of last year, Schrage was still working at Facebook, but is now self-employed, according to FEC records. According to those records, Schrage donated to Biden’s campaign after he left the company.

(Disclosure: Reporter Issie Lapowsky is married to an Amazon employee.)

Zapolsky made headlines earlier this year when an internal memo leaked, in which he called a fired Amazon warehouse worker, Chris Smalls, “not smart or articulate.” Smalls was fired after staging a walkout over conditions at the company’s Staten Island warehouse. Zapolsky, who has worked at Amazon for more than two decades, has been donating to Democratic presidential candidates since John Kerry’s 2004 race. Last fall, he and his wife, Lynn Hubbard, hosted a fundraiser for Biden at their home.

Earlier this year, Kessell stepped down from Amazon after 20 years at the company, during which he led Amazon’s brick-and-mortar retail work. In an email to employees announcing his departure, Kessel said he planned to “focus on community service, not for profit work, and other areas of interest.” Before he left, he donated to the DNC, but since retiring, Kessell has written checks directly to Biden and the Biden Victory Fund.

Another longstanding Amazon veteran, Puerini headed up Amazon’s grocery store chain, Amazon Go. Though she supported both the Obama and Clinton presidential campaigns in 2012 and 2016, respectively, she has yet to donate directly to Biden, instead, funneling the bulk of her donations to the DNC.

Parviz is best known for founding and leading Google X, the search giant’s “moonshot” factory, which developed Google Glass under Parviz’s watch. But in 2014, he jumped ship and joined Amazon to work on another Google X-type research team. This year, he stepped up his political donations compared to past cycles, pouring $50,000 into the Biden Victory Fund.

Vetter is the only Donald Trump supporter on the list. A reliable Republican donor, he’s contributed to every Republican presidential nominee since George W. Bush’s 2004 reelection. Back then, Vetter was working at IBM. Today, he’s one of Apple’s top lawyers and one of the tech industry’s top Trump donors. In addition to his $150,000 check to the Trump Victory Fund, Vetter has contributed to Republican candidates down the ballot, including Sen. Joni Ernst, who’s in a competitive race in Iowa.

Weinstein is a software engineering manager at Apple, and the former CEO of WorkflowHQ, a productivity app Apple acquired in 2017. Long before he sold his company, Weinstein donated small amounts to Democrats while he was (according to his LinkedIn profile) still in school. Since selling Workflow, though, Weinstein has stepped up his contributions, donating $30,000 this cycle to The People PAC, a national organization that raises money for down-ballot Democrats.

Kosut lists himself as an engineer in FEC filings, and patent records show he’s filed a number of patents for Apple that have to do with charging capabilities. This cycle, Kosut has donated $2,800, the maximum allowed by individuals, to nearly a dozen Democrats, including Biden, and has made smaller contributions to hundreds more.

Cole arrived at Apple by way of Google in 2012, becoming the smartphone giant’s director of employee communications. Cole has donated small amounts to the Biden campaign and joint fundraising committee, but her largest check went to Kitchen Table Conversations, a PAC that spent more than $2 million boosting Minnesota Sen. Amy Klobuchar.

Schmidt stepped down from Alphabet’s board in 2019, but, as of this summer, he was still listing himself as a technical adviser to Alphabet in FEC filings. He is part of a small but growing number of Democratic megadonors from the tech industry. He and his wife, Wendy Schmidt, have spent nearly $4 million this cycle on Democrats. Schmidt has written $10,000 checks to state Democratic parties across the country. That’s in addition to his work funding Democratic tech in the for-profit world. Through OneOne Ventures, an off-shoot of Schmidt Futures, Schmidt has reportedly funded 20 different political startups.

Helberg was, until February, one of Google’s policy advisers, focused on news products. Now, he serves as a senior adviser to Stanford’s Cyber Policy Center. Last year, Helberg and his husband, PayPal investor (and noted conservative) Keith Rabois, co-hosted a fundraiser for Pete Buttigieg’s presidential primary campaign. When Buttigieg ended his campaign, Helberg shared a series of photos of himself and the candidate on Twitter, calling Buttigieg’s campaign “more joyful, positive [and] inspiring than any I can remember.” But he has since contributed substantially to Unite the Country, a PAC that’s spent more than $28 million to support Biden and oppose Trump, and more than $700,000 to the Biden Victory Fund.

Daniel Doctoroff, CEO of Sidewalk Labs, which is owned by Alphabet

Before he started the smart cities company Sidewalk Labs, Doctoroff was CEO of Bloomberg and served under the company’s eponymous founder as deputy mayor of New York City. But before Bloomberg announced his own short-lived candidacy last fall, Doctoroff contributed small amounts to the campaigns of both Sen. Booker and Sen. Elizabeth Warren. This cycle, he has funneled most of his contributions to a joint fundraising committee that funds Democratic House races.

Spero has spent a decade at Google, building out its mobile and advertising business. In addition to maxing out his individual contribution to the Biden campaign, he’s backed tech-friendly groups like DigiDems and Tech for Campaigns, both of which help down-ballot progressive candidates build tech tools.

Update: This story was updated November 2 at 5:49 pm ET to include additional contributions from Jacob Helberg that weren’t initially included in the FEC’s database.