Below are just a few things that many forgot or never knew that everyone says can’t happen here including those who you see pictured in lines wait to get whatever scraps are still available.

In effect, the US has been adopting the little by little the practices of the USSR in which almost all aspects of society are nothing more than a gigantic propaganda machine run by the “apparatchiks”. Those who unlike the average citizens had access to special stores, where they could buy “western goods” as well as fresh foods, while the commoners had to stand in “food lines” like those shown above to get stale bread; if you were lucky enough to get there really early.  And while we’re at it consider this, owning a car was a extreme luxury that few could afford and even if they could,  many of the roads were restricted for travel only by the favored classes. That’s how socialism works.

One could probably say “wait a one minute” don’t we have favored classes in the U.S. today? Sure we do, but it’s based on how much money you command or theses days unlike our founding principal of majority rules, the favorable classes are those manipulated by those who have a need to control everybody else are, non-white.

If your thinking the above was then and it can’t happen now. Well look below and you’ll see just some of the current food lines that are going on in other totalitarian controlled countries. 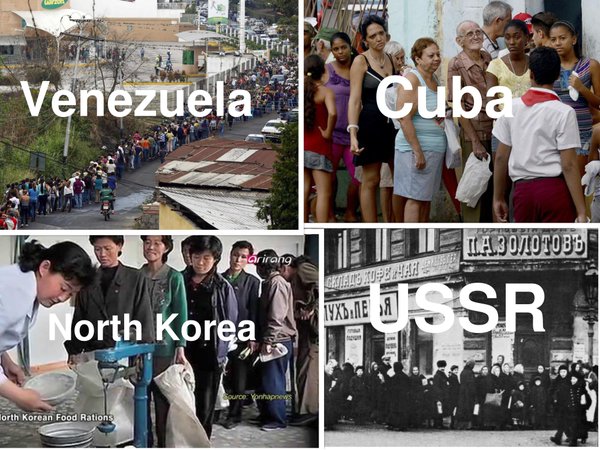